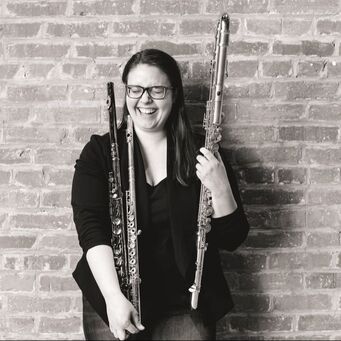 ​Pittsburgh-based flutist Sarah Steranka enjoys a multifaceted career as a recitalist, chamber musician, and advocate for new and experimental music. Since making her solo debut with the Carnegie Mellon Philharmonic at the age of nineteen, she has been featured in concert throughout the US and worldwide. Additionally, she has been named a finalist and prizewinner in many national and international competitions, including the International Low Flutes Festival’s Alto Flute Competition and the Flute New Music Consortium’s Flute Artist Competition.

​Sarah is dedicated to exploring the innovative work of living composers and pushing the boundaries of flute performance. Recent additions to her repertoire include world premieres by Ramin Akhavijou, Marilyn Shrude, Elizabeth Brown, Zvonimir Nagy, and Nancy Galbraith. Sarah has appeared in Music on the Edge’s Beyond Microtonal Music Festival, The Pittsburgh Festival of New Music, The Cleveland Uncommon Sound Project’s Re:Sound festival.

Additionally, Sarah has presented programs of newly commissioned solo works at the 2019 New Jersey Flute Fair and the 2019 SCI Conference at West Virginia University. Her recordings of solo and chamber works have been published by Albany Records and Naxos.

As a symphony musician, Sarah is second flute of the Westmoreland Symphony and also appears with the Akron Symphony and Erie Philharmonic. In addition, she is a core member of the nationally recognized new music ensemble  Kamratōn, where she plays flute and piccolo as well as alto, bass, and contrabass flutes.

As an educator, she maintains faculty positions at Carnegie Mellon University, the Pittsburgh Flute Academy, and Kathy's Music. She has also appeared as a guest artist and lecturer at the Woodlands Foundation, West Virginia University’s  International Flute Symposium, and the Schwob School of Music at Columbus State University. Her instructional work has also included teaching actors to play the flute for film roles.

Sarah holds a master's degree from Duquesne University where she studied with Jennifer Steele and performed with the Triano Woodwind Quintet under the artistic guidance of James Gorton. She earned a BFA at Carnegie Mellon University where her principal teachers were Alberto Almarza and Jeanne Baxtresser. ​ ​